My name is Gloria. My parents bravely emigrated from Hong Kong to Canada over 40 years ago, making me proudly Chinese-Canadian. Additionally, I’m a conductor, educator, singer, instrumentalist, and Candy Crush enthusiast (Still? Yep). I’ve had my heart set on choir since my first encounter with a cluster chord in Grade 9, and an equally-large passion for contemporary, jazz, and pop music. Over the past decade and a half, I’ve had the immense privilege of learning, working, teaching, performing, and living in four provinces and states and two countries. By singing in a choir, I have experienced (and continue to do so) many makings of humanity which may otherwise be difficult to understand or approach without music.

However, I am beginning to evaluate the ways in which the choral education system is biased and how much of it is really rooted in colonialism. When you think of some of the world’s so-called “greatest choral conductors,” how many of them are North American or European, and how many represent other regions or nationalities? Do most of those individuals fall under the first category? Why is this the case when the innately human tradition of singing has existed in all regions for centuries?

Addressing issues and systemic biases within an artform which we care so deeply about may be difficult to approach at first, but is absolutely essential in an effort to end traumatic and otherwise preventable experiences for our singers. To start, the dismantling of any biased system in which we are a part begins with self-reflection. In the months and years to come, I’m keen to find ways to uplift the voices in choral music which may not have received the proper recognition, dignity, and understanding that they deserve—especially those in Canada.

Recently, I became an administrator on @choirisracist, an Instagram platform dedicated to sharing anonymous personal stories of biases, racism, sexism, and microaggressions within the world of choral music, rehearsal, and performance. Inspired by other similar pages in related fields bearing the “______ is Racist” moniker, this platform has proven to be a necessary space for releasing past traumas, injustices, and other painful memories which contributors have been holding onto for years without a proper outlet; it is NOT a form of entertainment or “delivering the tea.” These stories exist as anonymous public statements, often facilitating a much-needed conversation and re-examination of our own practices as educators and choral musicians.

“So you’re a conductor, and you help run a platform called “Choir is Racist”?” Yes. Although it was initially inspired by the “______ is Racist” network, these profiles all receive submissions of deep-seated issues that exist beyond the scope of racism. Again, the idea of “decolonizing” any educational space or making any curriculum more “anti-racist” must begin with the person administering it—or in our case, the person at the podium. In this self-reflection as a conductor, I admit I have been careless with my choices on some days — whether that be with word choice in rehearsal, programming, or other similar decisions. Working on the team of @choirisracist is not only a way to practise this self-reflection constantly, but to help bring the greater choral community one step closer to facing these issues and fostering an anti-racist, anti-sexist culture. We know that change can be good and hope that it can come sooner if we start having these conversations out in the open with our mentors, students, colleagues, and audiences.

As we affirm these experiences from musicians around the world, I can’t help but to notice similarities coming up not only across posts, but many that are much too reminiscent of some of my own choral experiences as well. We will look at a handful of anonymous public submissions (view all posts on Instagram at @choirisracist if you feel inclined), and the biases present. I have included a few guiding questions which arose in my own self-reflection towards decolonizing our spaces. 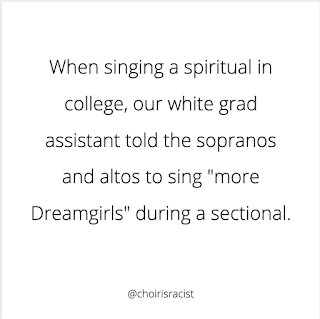 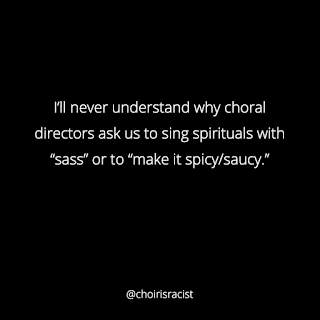 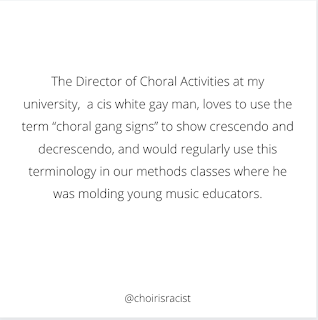 Conductors often use imagery in rehearsal to describe or invoke a particular sound within an ensemble. You’ll hear phrases like, “Can I hear it brighter/darker/more crisp”, or even “picture a school of fish swimming in the water on a warm day at the beach.” Descriptive language can be effective when rehearsing to help singers mentally frame a piece and awaken musical contrast. However, it’s our job not to present any implied biases or stereotypes that most often do more harm than good.

Some of us may be able to recall a rehearsal scenario in which the conductor says something like, “Hey everyone, let’s end on a good note. Let’s sing (name of spiritual/folk song/other cultural piece)”. Of course, we assume the conductor has good intentions with this. However, this music is too often not given the adequate rehearsal time which it deserves in comparison to time spent on other (typically Western or European) repertoire.

Black voices matter, Black composers matter, and it is only fair that non-Western classical music be dedicated sufficient time and respect not only to be pronounced correctly, but truly understood correctly.

Without a doubt, The Aeolians of Oakwood University (dir. Dr. Jason Max Ferdinand) captured all our hearts at ACDA 2019, with a diverse concert program showcasing their absolute musicality on every level; the Aeolians were even nicknamed “the choir that broke ACDA.”  However, their caliber as one of the top—if not the very top—choirs in the world existed long before their appearance at this conference. 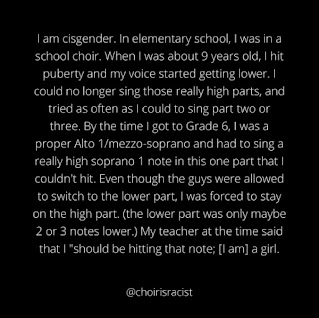 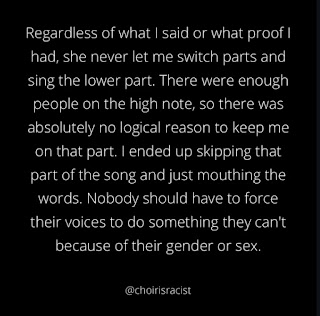 Since adolescence, I’ve been incredibly insecure with all aspects of my voice from speaking, singing—reading out loud.I was either asked to sing high completely in head voice, or my voice was always much too low. To be honest, some of my most favourite memories in choir have been from singing at pitch with the tenors and baritones. Later on in academia, I noticed that the only repertoire written for the so-called “low female voice” mostly came either from Baroque composers like Vivaldi and Bach, or from channels outside of Western classical repertoire like jazz, pop, or rock. What it comes down to is that the voice does not have a gender, provided that a singer is shown how the voice functions healthily in order to avoid any possible vocal injury.

We may not get it right the first time, or even ever fully get there, but if we don’t start re-evaluating now and checking our own ideologies and privileges, the same destructive biases will transfer to our students and perpetuate this harmful cycle. If we consciously turn ourselves away from the deep-seated issues which we know exist within our own house, can we ever truly begin healing from generational trauma and unfairness? Generational trauma has no business in the choral space or any environment for that matter; it has been time for this, and we might as well take this opportunity away from the physical rehearsal space to begin this much-needed work on our own.

Moving forward, @choirisracist will remain open as a platform for submissions in our hope that these stories do not repeat themselves and that they will remain as pieces for all musicians in self-reflection to each continuously “do better.” If we don’t, we risk committing a great disservice to our students and community as educators.

“Don’t cancel the year that woke us up.”

Originally from Vancouver, BC, Gloria Wan is a first-year Doctor of Music student in Choral Conducting at the University of Alberta under the tutelage of Dr. Timothy Shantz, and is active as a conductor, singer, educator, and instrumentalist. Most recently, Ms. Wan was the Choral Music Director at Swift Current Comprehensive High School in Saskatchewan, additionally teaching English Language Arts, Psychology, and Arts Education. Her principal conducting study has been under the guidance of Drs. James Jordan and Joe Miller. Ms. Wan has taught music within various contexts and age levels, including elementary, middle, and high school. She has served as Assistant Conductor for Westminster Schola Cantorum, Alberta Youth Choir, Princeton GirlChoir and other ensembles, along with performing with and assisting a number of other vocal groups in the US and Canada. Ms. Wan has been a session presenter and poster presenter at the International Symposium on Singing and Song and Podium 2018, respectively. As a performer in various genres, she has appeared alongside esteemed ensembles such as the New York Philharmonic, Philadelphia Orchestra, National Youth Choir of Canada, and at venues such as the Forbidden City Concert Hall, the American Choral Directors Association National Convention, and two seasons at Spoleto Festival USA, amongst others. As an instrumentalist, Ms. Wan is in demand on guitar and percussion. Along with djembe on the single Peace Song, she can be heard on Westminster Choir’s album Martin: Mass for Double Choir. She has studied voice and piano privately, and holds Kodály Level III certification. Ms. Wan holds bachelor’s degrees in music and secondary education from the University of Alberta, and a master’s degree in choral conducting from Westminster Choir College. 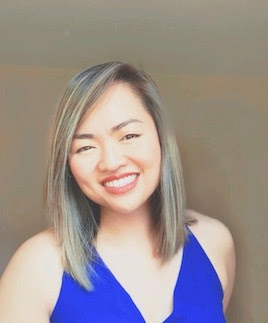 Have an idea or perspective you wish to share for this decolonizing choir series? Let me know at this link.
Posted by misssable at 9:00 AM