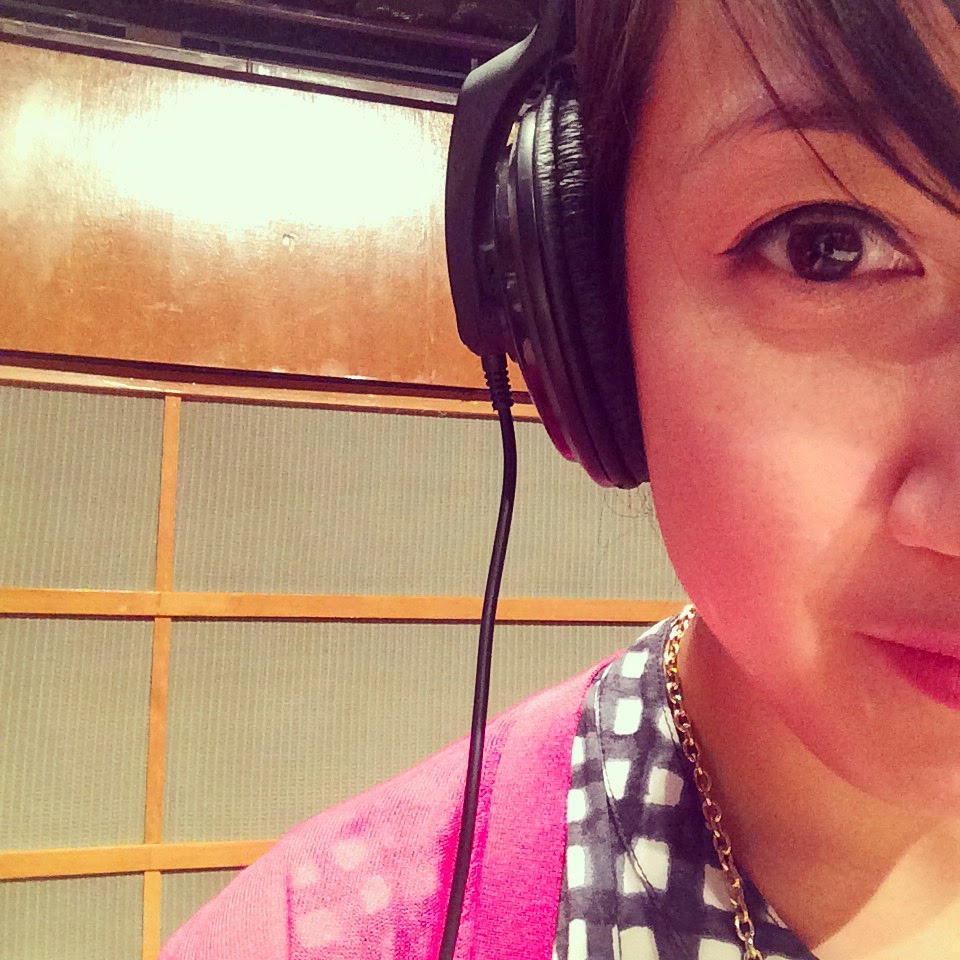 In October, I started a ukulele coverband with my sis. We had talked about forming a group for a while. We even had our band name picked out: mèi mei (translation: little sister in mandarin). However, securing a gig at the VIP Reception for a Nina Haggarty Centre of the Arts Fundraiser expedited our band's formation. 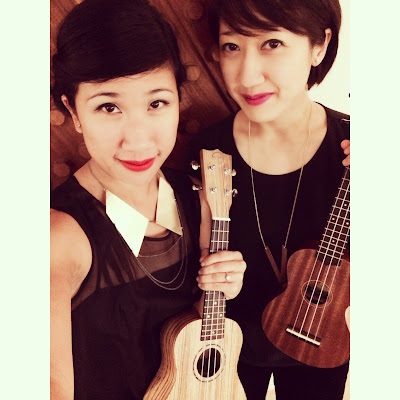 It not confidence boosting to admit that you are the weakest link; however, it was true in this case. The only instrument I really had an ever trained was my voice. As you can imagine, there was as steep learning curve for me to be able to play basic chords on ukulele while singing at the same time. I have terrible fine motor skills. At the same time, nothing ever gets better without practice so I took the challenge to develop my brain's motor cortex regions. We carried off our first gig well enough with the ambient noise of the cocktail party to disguise any of my glaring musical errors. 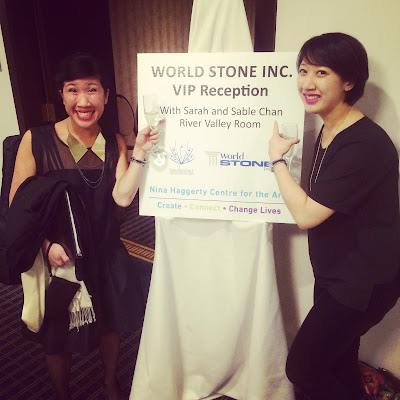 The whole process gave me a glimpse into how my neural networks consolidate new information. I gave myself very basic goals. My first week's focus was just holding my ukulele so I wouldn't be crushing my contorted thumb behind the bridge. The next week was trying to play chords and sing at the same time at a reduced tempo. The next week was learning that I can strum in different patterns to create rhythm. The following week was attempting to sing right words, play correct chords, strum, and keep a steady tempo. The only strength I have is that I am able to automatically sing a harmony line because I can hear it in my head. Plus, I am strumming the chords so I am supplying myself the notes.

There were short intense periods of practice everyday. Drilling awkward chord transitions and willing my fingers to move with more accuracy between chord postures were at the top of my list. I felt a sense of satisfaction when my fingertips would tingle due to lack of sensation. I was forming callouses! One step closer into becoming a ukulele instrumentalist. I began learning on my niece's ukulele that is green and covered in tropical fruit. As the gig approached, I decided the week before I should pick up my own ukulele. While I was tempted to purchase a colored one, the sound was terrible so I opted for something in the mid-range. 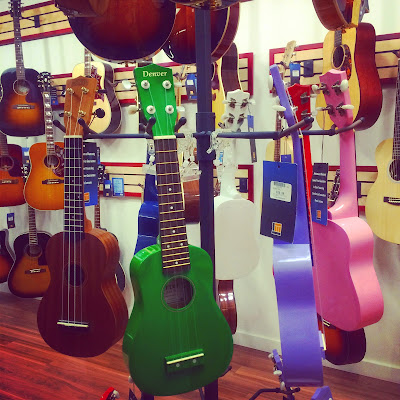 Following the reception for the Nina fundraiser, we even had the chance to sing some holiday tunes for a private shopping event with Cory Christopher at Simons this past weekend. 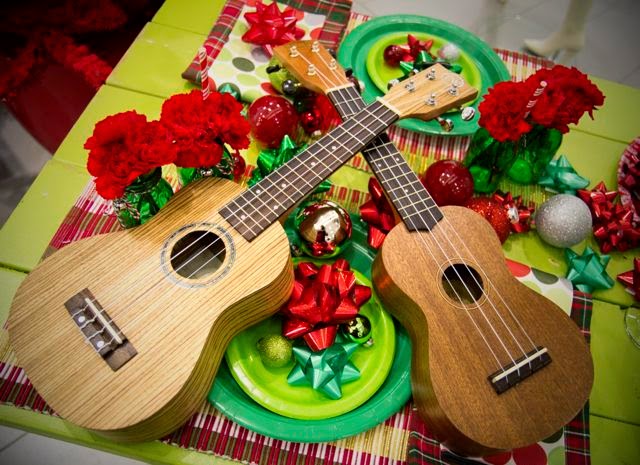 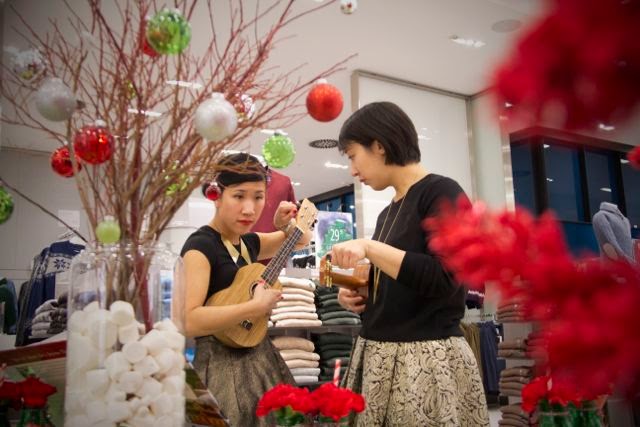 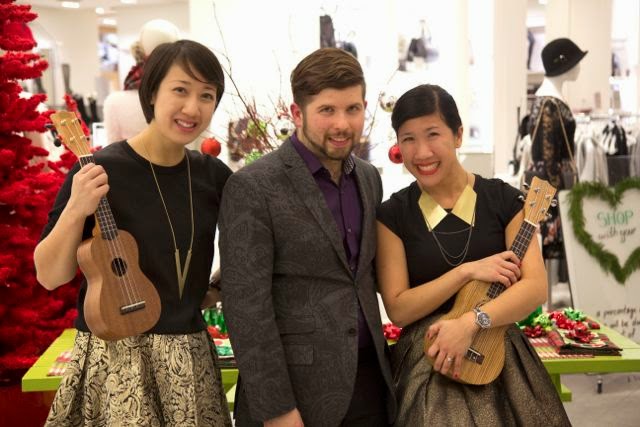 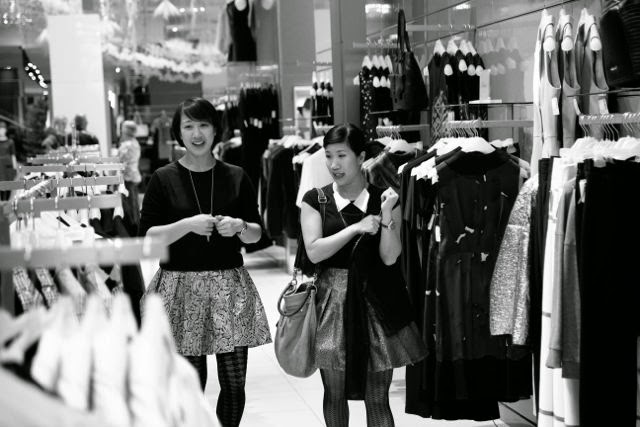 Thanks to Nanc for these amazing pics from Simons!

While mèi mei's future is undetermined at this point in time, all I know it's fun to spend some time with my sis and have the courage learn something new.

A Leap of Faith - An Interview with Canadian Choral Composer, Jason Noble