We made it this far! Perhaps our laptops are all running a bit slower with the increased amounts of video recording and sound recording software we downloaded to complete virtual choir tasks, we have an increased array of lounge pants to work in, and we have a pre-zoom meet routine of clearing our rooms of pets and family before joining calls.

This past weekend was Podium 2022 in Toronto. The last one scheduled in May 2020 was cancelled. Fast forward two years and choral leaders, singers, choirs, administrators, exhibitors, and enthusiasts met for the first time in person once again. As primarily a choir blogger and choral singer participating in Podiums for the past 10 years, my relationship with the conference and festival has, not surprisingly, changed throughout the years.

In 2012, I was accepted to the National Youth Choir of Canada (NYCC) that would perform in Ottawa. Due to scheduling conflicts, I wasn't able to participate in NYCC but I still attended Podium because my community choir, Belle Canto, was invited to perform. Podium 2012 was marked a pivotal moment in the expanded vision of this blog. Instead of it being a platform speaking solely about my personal experiences in choir, I began to interview key choral voices in our country to generate a discourse. In a time where there is less formal writing about music, it's even more important to share and discuss what is happening now. My interviews with Lydia Adams, Ivars Taurins, Michael Zaugg, and Hilary Apfelstadt were interview articles I wrote as well as summaries on what was happening at the conference. At that time, I recall there being less than five people using Twitter to tweet the conference hashtag. There was no Instagram. I felt like I was the lone social media voice minus a few voices tweeting back to me. This paragraph from my 2012 summary still resonates for me today:

My aim through actively using blogging and social media during Podium 2012 was to showcase the power through use of these social media tools. I know that people feel uncomfortable with making public statements over social media, but if we are accountable for our words… then what is the fear? There are always ways to use tools responsibly and social media is no different. As far as I am concerned, the more we can share information and discuss our experiences in an open musical forum, the more that people can benefit. If I ever wanted to go back and remember my conference activity all I would need to do is search for my Podium 2012 blog posts and tweets. It is easy to be wary of a form of communication that seems so foreign and public. It is even easier to dismiss them. All I ask is for people to consider and potentially embrace a new form of musical discourse. We are all looking for ways to connect; it is a shame to not consider implementing an instrument that works so effectively. As with any instrument, it can only be as good as its instrumentalist and there is no better way to learn than to practice.

In Podium 2014, I was present once again since Pro Coro Canada was invited to perform in Halifax, NS. I continued my blog content creation by adding interviews with Peter Togni, Cy Giacomin, and Matthew Emery. Podium 2016 was in my hometown of Edmonton, AB and marked the start of a significant social media presence due to the assembly of the Choral Avengers team. What a dream team. A group of passionate, choral-minded individuals from across the country all met in Edmonton to cover every corner of conference and festival content. There was live tweeting, photos, and interview content leading up to the conference. I took a bit of a Podium break after that and the social media duties passed onto Amy Desrosiers, a member of the Choral Avengers, and to the Choral Canada staff and conference organizers. It was time to take a step back.

At that start of 2020, I was making plans to head to Podium 2020 in Montreal to attend as a delegate. No singing duties and no formal social media duties. Sure, I would post things to social media but without the pressure of timelines, scheduling, and content creation amidst the frenzy of the conference and festival itself. That was all placed on hold until this past weekend. I headed into Podium 2022 with the same plan but more worn down from the pandemic. I knew I lacked the stamina to jump in like I previously did. I would watch a session or concert for 1-2 hours and then rest or explore on my own for 1-2 hours. This was not hard to do with Toronto being filled with many neighbourhoods, restaurants, and friends I haven't seen in over 4 years. While it was joyful to see so many wonderful faces, both familiar and new, it was also overwhelming to see so many people.

The amount of overflowing, musical energy surpassed the reduced, cautious capacity I have developed over the past years to cope with the fact that there was a huge live music void in my life. While many choirs were singing in different ways throughout the pandemic, whether virtual or in-person and masked, there was an unease throughout all of it. Virtual singers would continually rehearse alone in their homes, ignoring the glare from their ring lights while staring at the dark zoom grid of fellow singers. They would resist the urge to do yet another recording of their part before submitting the final video and audio to their director. In-person singers wondered who would drop out of productions due to sickness, constantly assessing themselves using checklists to determine if they felt well enough to go to rehearsal, staying physically distant from other choristers at break, avoid eating lunch together, and leaving immediately after rehearsals to avoid gathering. For me, singing was not enjoyable at this time. I was anxious before every rehearsal. I would wonder if I was asymptomatic and was just going to infect my fellow singers. I derived little pleasure from singing into a fabric muzzle and bathing my face in my own oral humidity for extended periods of time. There was an underlying, persistent tension throughout all of it. However, I figured that some singing was still better than no singing.

Seeing the reunited faces and concert spaces come alive with music this past weekend was beyond nourishing and inspiring. We felt whole again. We collectively reopened a musical part of ourselves that has been closed for a long time. The pandemic has overwhelmed many of us with a debilitating sense of loss. It will take more time to process what has happened; however, at this Podium, we were able to begin the healing process together and begin opening our hearts to music-making once again. 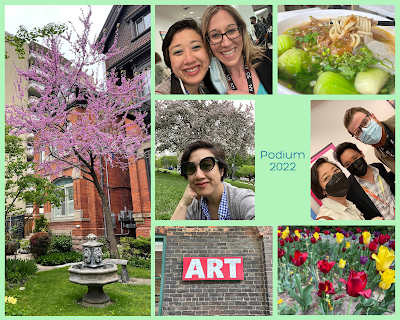 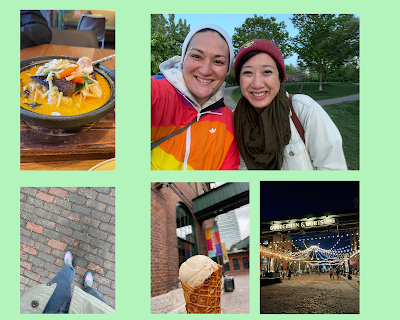 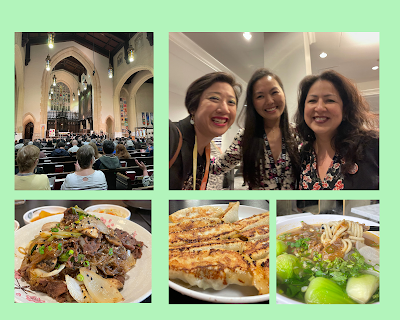 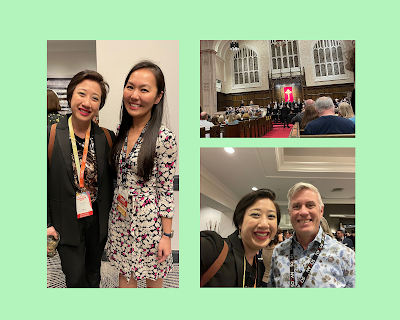 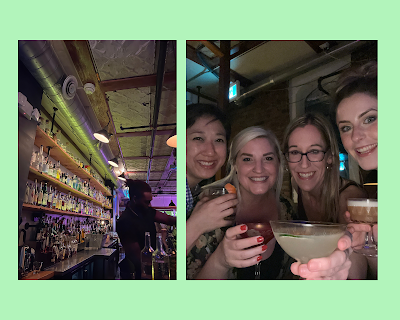 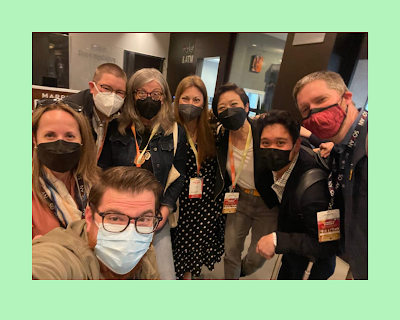 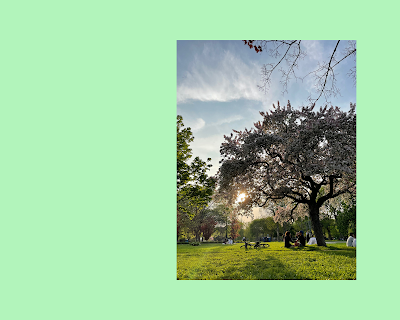 Posted by misssable at 10:00 AM No comments:

Email ThisBlogThis!Share to TwitterShare to FacebookShare to Pinterest
Labels: Podium 2022

The Beginning of Happiness 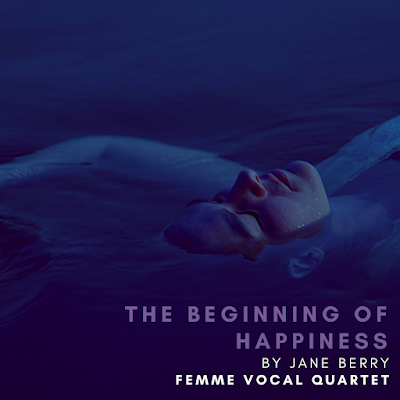 Dear readers,
When a fellow live theatre goer shouted at me in the Fall 2021, "another survivor!!!" I chuckled at the statement. It took a moment before I realized that it was no exaggeration. I wish to acknowledge the hardship, adaptation, revision, planning, cancellations, equipment, protocols, and more that artists have had to navigate during this pandemic. We are, indeed, survivors. In these past two years, I have acquired black singer masks, more home recording equipment, attended zoom rehearsals when I don't feel well enough to attend in-person rehearsals, and rapid test before rehearsals. At this point in time, seeing singing faces covered with masks is the norm. I remember at one of my first rehearsals back in June 2021, I marvelled at how heads are attached to bodies, they're not just heads floating in a virtual meeting frame. How was it that 25 other bodies arrived at the same time and place to sing with me? It was such a sensory overload to hear that much sound but a welcome change to feel the energy of singers around me again.
I have never been a fan of learning the hard way. I welcome the past wisdom and advice of those who have walked the path before me. However, these past 2 years felt different as we were all figuring out how to continue with Arts creation with fluctuating pandemic restrictions and risk levels. My collaborative project with FEMME Vocal Quartet and Good Women Dance Collective was no different as we cancelled our live show, "The Beginning of Happiness," weeks before the premiere. It was a project we had all been rehearing since July 2019 and planning even before that time. Amongst the artistic core in the Spring 2021, we decided that a film would be a realistic and safe way of seeing through the project. Director of Photography, Tamarra Lessard, assembled a crew for us to film in August 2021. There were many logistics to consider in adapting the live music + dance show to a film. Park permits needed to be obtained for evening filming, costumes had to be adapted to be used in water, and most significant, the score was shortened from one hour to 30 minutes. The film is now available for streaming from February 17-24, 2022. Half of the proceeds will be donated to WIN House.
During our recording sessions in May-July 2021, FEMME recorded the entire one hour work at Silver Studios. All the singers recorded their parts separately to stay covid safe and the recording engineers, Caleb Nelson and Amelia Chan, later layered the tracks to form the ensemble sound. This was possible since we sang to click tracks programmed to specific tempos and heard the playback of the other voices who had recorded their parts already.My ears are greeted with the reunited sound of FEMME once again as listen to the album writing this post. The music is such sensitive and informed writing for treble voices. For a work that explores and reflects upon issues of domestic violence, there is a healing beauty within the musical storytelling. There is such a wide range of vocal textures created ranging from the warm feel of love to breathless unrest. After having this work living in my tablet for three years, I am so grateful that this music gets to live in the world. There is a wonderful sense of closure to be able to release this music and invite listeners in.

The album is available for streaming and download from Bandcamp. We suggest a price of $10 for download but will gratefully accept donations above that amount. Proceeds from the album will go towards FEMME's continued work to amplify a contemporary female perspective within choral music through new commissions and performance.

Posted by misssable at 12:00 PM No comments: