Voices In the Living Room 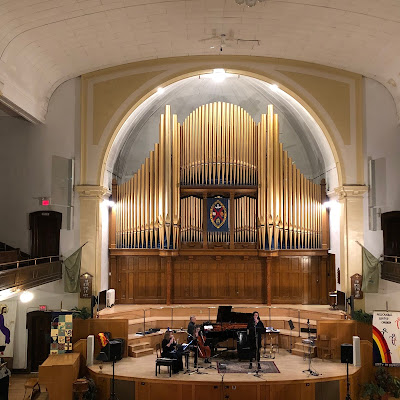 I will never tire of hearing the ranges of a human voice. There was a sense of warmth and play during New Music Edmonton's UltraViolet concert last night. They also invited guest vocalist and composer, Jane Berry, into their living room space. Chenoa Anderson, Allison Balcetis, Amy Nicholson, and Roger Admiral began with John Cage's Living Room Music as they each played items one would find around their home, such as a rifled through magazine or a 2x4 piece of wood. A rhythmic series of percussive taps and restless rustles of paper invited the audience into their on-stage domestic space. They also recited Gertrude Stein's "The World is Round," which introduced the voices of the instrumentalists into the space as well. They sat in a semi-circular formation complete with carpet on the floor, two recliners and two wooden chairs that looked like they had been been borrowed from a dining room set, a lamp on a side table, and even a plant perched at chairside.

Tanzer Lieder by Ana Sokolovic is structured with three different language voices in the five movements from French, German, and English. Sokolovic's writing demanded an array of vocal technique from Berry from the wailing vocal glides in Stimmen to the haunting vocal suspensions in Last Song. There was a cohesive tension created from the instrumentalists and Berry's vocals throughout the movements. The sounds from the piano and cello strings often matched the held frequency from Berry's own vocal folds. The pulsating vibrato on the flute gave an audible sound to the fluctuating breath heard in a body.

Alyssa Aska's The Woman and the Lyre: Sapphic Cycle shared many movements of vocal and instrumental play. I am more tremulous had a racing agitation between Anderson and Berry and there was good use of created reverb in Of the tacet earth where Berry's live vocal input was processed live and fed back to the audience on speakers surrounding the audience. It changed the resonating space around Berry's voice.

Chains  by Frederic Rzewski was by far one of the most playful as Berry read a local newspaper on the recent climate strike led by Greta Thunberg at the Alberta Legislature. Berry's speaking voice ranged from matter-of-fact to sarcastic depending on the sentence being read. A large repertoire of sounds were shared from tablet and phone ringtones, boxing gloves being used to play the piano, and the sound of the typewriter echoing the other voices on stage.

There was the world premiere of Berry's composition The Break, which shared text from a young woman, Cassandra Siwiec-Hlewka, with bipolar disorder. The poetry was from Siwec-Hlewka's first manic episode. Berry created opportunities for each instrument to have their own vocal line before introducing her own, which was the last in the progression. There was a sad beauty in the lyrical lines, but space between each instrumental introduction, as if space was being held for them on stage to be heard. There was this feeling of cyclical descent with text "catch me, under the water it's pulling me" and repeated phrases such as "I pray and I pray..." Out of the ebb and flow of vocal lines emerged a hopeful image of a flower blooming in the darkness. It was a beautiful image to finish the first half of the concert. An acknowledgement of the internal resilience that people possess even when their challenges are not visible.

Posted by misssable at 1:00 PM No comments: