There appears to be a raw void following a period of intense music making. During the past week on tour with the Canadian Chamber Choir, I had the privilege to connect with other singers through song. As on any tour, energy levels peak and dip, rippling through proximal choristers. The majority of these emotions are one of elation, compassion, and warmth; however, there is a compounding fatigue which leaves one wondering if a nap, caffeine, or snack are adequate to give an energy boost to get through another 2.5 hours of rehearsal.

Travel always gives an opportunity to highlight what one needs in order to maintain self-care. I implemented small ways to maintain my stability: I brought my own coffee hand grinder and aeropress to ensure consistent caffeine delivery each morning. I tried to have some outdoor time everyday for a few minutes whether it was lying on the grass outside or venturing out for a walk in the pouring rain to get a coffee from a nearby cafe. When there is so much that is outside your zone of control, it is important to embrace small ways you need to regulate yourself.

There was a large focus on educational workshops with choral communities of sizes and age ranges. I remember looking out into the audience at Nicholas Senn Highschool and watching friends hold each others' hands as they watched us sing an arrangement of Gordon Lightfoot's Song for a Winter's Night. One of the members, who also happened to be Captain of the football team, chuckled with disbelief at the low range of the basses in our choir. Every time I see moments like this, it reminds me of the first time I saw the CCC performing in Edmonton. It couldn’t believe that singers could fly into one location from all across Canada and perform at such a professional level. I often have these moments reflected back at me when I watch the faces of students watching Canadian Chamber Choir perform.

Another moment that floored me was watching Sullivan Highschool Students learn musical skills in a collaborative manner. We worked on the school Fight Song, Fight on Sullivan, Fight On. Two students sharing the bench at an electronic keyboard and playing the chords announced by their teacher. The keyboard keys had stickers on each of the notes with the note names to help them landmark which chord they would need. I have since learned that Sullivan Highschool has a large immigrant and refugee student population. It appeared as if the the social, economic, and racial labels for each of these students could be temporarily set aside during these musical moments of unification.

Who knew that in the basement of the Oakdale Covenant Church in south side Chicago was the Oakdale Children’s Choir under the direction of Terrance Smith? Hearing them learn without sheet music in a call and response structure with Terrance was some of the most electrifying, invigorating, and exciting feats of choral singing I have ever heard in my life. I had goosebumps during the entire performance. It’s like somebody turned up the dial on volume and searing resonance and my ear drums hummed in response to the electrifying sound they were creating. It was also a marvel to see them create something so amazing on the grit of their local community and charismatic musical leader. 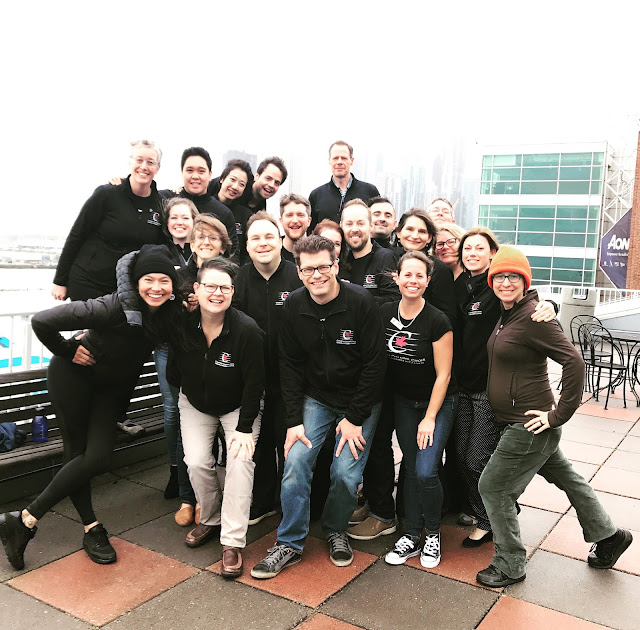 Another important component during this tour was working on the Where the Waters Meet project with Composer, Carmen Braden, and Indigenous Dancer, Activist, Actress, Model Sarain Carson-Fox. It will be a collaborative commission surrounding water: personal memories, safety, access, all articulated through sound and dance. Sarain opened the process with a smudge ceremony to unify the singers and acknowledge the water in all of us, further emphasizing the similarities in ourselves before we began to discuss the differences that still exist in the relationships between settlers and Indigenous people. As Carmen described it, the areas where two sources of water meet is often turbulent and muddy. However, navigating that process is still something she was committed to as a composer and one we collectively agreed, as Artists, was an important one to continue. Never before have I had the opportunity to sing sound sketches by a composer in formative compositional stages. A commissioned work is given to me by the conductor in its completed form. However, in this process, I get to see the thought process that goes into creating a new work. What is a privilege it is to have time allocated to this creative process. 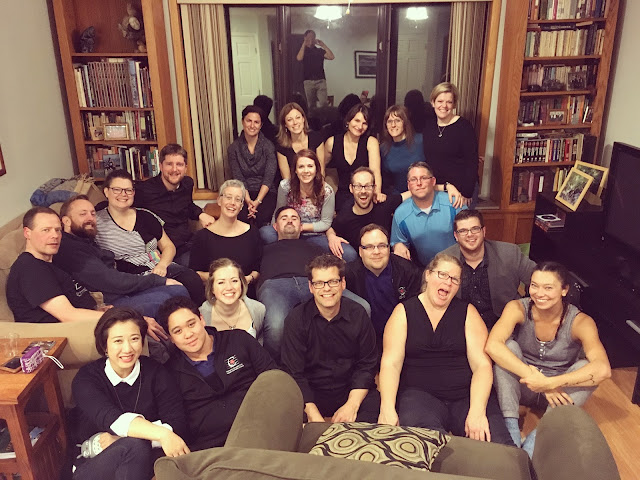 The past week with Canadian Chamber Choir reinforced the importance of non-competitive spaces where you can create Art. For me, it was allowing myself to relinquish a sense of inner control and invite a connection with others through shared voices. Being grateful or privileged doesn’t begin to describe the lingering feelings following the tour. If I think about my own family, we didn’t have the opportunity to choose each other. We had to learn how to live with one another. Being chosen to join a choir, being adopted into a family, it feels entirely different. You trust in the vision of another and the members create an inclusive space. I can think of no higher compliment than to be adopted into a choir family. It renews a vigor in me to embrace challenges, continue learning, and to keep performing.

More photos from the past week:


More social media gems over the past week:


The choir and advanced modern band had the pleasure of being joined by the @canadian_choir this afternoon! Here they are performing the fight song🎶 pic.twitter.com/oFkdnaERv4
— Sullivan HS Music (@SHSTigerMusic) October 11, 2017

Enjoying a fantastic workshop with a group of students from the @SennHS choral program. Delving full-on into vocal technique with Julia and the artistic team. #CCCChicago pic.twitter.com/XKOBU2xdWl
— CanadianChamberChoir (@canadian_choir) October 12, 2017

#OnAir: For this week's #GlobalNotes, we have Canadian Chamber Choir in studio! Tune in @WBEZ. Live on Facebook: https://t.co/3wgd6bHSXY
— WBEZ Worldview (@WBEZWorldview) October 11, 2017

Head over to the CCC's Facebook page to check out some photo highlights from Day 1 and 2 of our first international excursion. #CCCChicago https://t.co/mggx62Tvps pic.twitter.com/nyQd9kyRhV
— CanadianChamberChoir (@canadian_choir) October 10, 2017