An Interview with Melissa Morgan 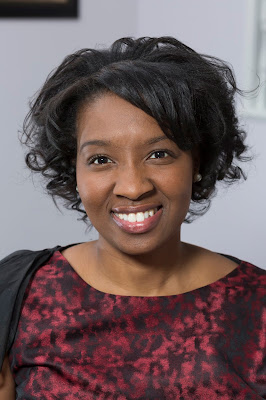 Melissa Morgan’s professional world underwent significant change in 2019. Firstly, she decided to step away from duties with the Prairie Chamber Choir (PCC). The group was at a point where either there would be a major investment of time to continue the non-profit group established or it was time to refocus her energy into other work. Morgan was also teaching full-time at Luther College High School while at the same time she was directing the PCC. “In my mind, I needed to take some time for a work-life balance,” she reflected as she spoke with me over the phone. Morgan’s passion is evident when she speaks about music and education. She continued about the PCC, “In Regina, we didn’t have an SATB conducted choir that specialized in Prairie choral music but I had to make a choice. I decided that I would step away from the choir. Shortly after I knew [I would step away], a terrible thing happened - Dominic Gregorio, the Choral Director at the University of Regina, passed away.”

A heavy silence enters the phone line between Morgan and myself.

The news of Gregorio’s death shocked the Canadian choral community. His passion, advocacy, and presence within the community connected with many people. Morgan notes that the choral community is still trying to process the painful shock of his sudden death. “It was tough at the University here, his students adored him, he adored his students” she shares. Gregorio was always one to lend a helping hand and did for Morgan the week before his passing when he volunteered last minute to help with the Vancouver Chamber Choir concert. 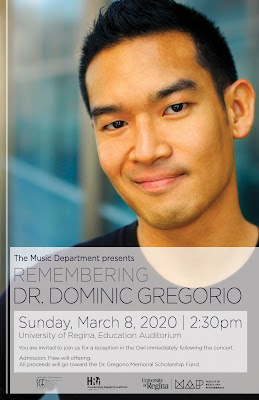 “When his position came up [at the University of Regina],” Morgan shared , “there was a lot of uncertainty for me when I applied. Yet, I feel it’s a great honour to continue his legacy. Dominic did a lot of wonderful things for the University and the students. Everybody knew and loved him and it is my goal to nurture and continue the attitude of joy and culture of community and that he loved to spread.” revealed Morgan. It is hard to imagine a better individual to continue into Gregorio’s position at the University of Regina other than Morgan. She and the Music Faculty understood that the best way to honour Gregorio was to pick up and move on: “He wouldn’t want everybody moping around. He would want everybody to do their best, to keep moving forward, to keep being as excellent as they can. That’s what we have to do.” There will be a concert in remembrance of Dominic Gregorio on March 8, 2020 and a scholarship established in his name (please see the bottom of this post for more details).

As with any new job, Morgan is experiencing a learning curve in her new position as Director of Choral Music at the University of Regina. This year is dedicated to developing her coursework and conducting the University choirs. One such course is the Introduction to Choral Techniques for primarily Music Education students. It required her to reflect on her own learning practices and how to translate that for her students. Some of these questions were to ask herself: “How do I approach teaching gesture, various beat patterns, what are the students doing with their bodies, and how do our bodies communicate with people in front of you… how do I introduce and teach the things that I have spent the last 25 years of my life trying to figure out?”

As a fellow woman of colour, I was very eager to hear Morgan’s thoughts on being a Black woman in a prominent Faculty position within the area of choral conducting. Morgan shares her family history to provide context, “I grew up here in Regina. My mom was a single mom, my dad passed away when I was four. My mom raised my sister and I. When my dad passed, my aunts and my grandmother came to help her because she was pregnant with my sister at the time. I grew up with my family being one of a handful of Black families living in Regina, Saskatchewan. In elementary school, my sister and I were oftentimes the only two Black kids in the building. In high school, it was me and one other girl, we were the two Black students in our grade. Throughout my university days there weren't a lot of Black students on campus and less in music. It was very sparse. I never had any Black teachers.” It is clear that Morgan speaks with an awareness of how others may have a certain perception of who she is because of her skin colour but this doesn’t impact her daily life. “I am a Black woman. I identify as that and I know I represent the community. But I find my character, how I treat people, my work ethic, the way I interact with others, that is number one. Second is being as knowledgeable as I can about my job,” she shares. She recounts a tale from her first years of teaching in a high school:

“I had just finished my Masters in choral conducting and I ended up teaching a full-load of English. I got to school the first day, I was setting up in the classroom, a student walked in, I didn’t see the student. I was getting ready at my desk, and I heard, “What!?!?! they are hiring Black people now!?!?!,” Morgan looked up to see a Black, female student continue, “I never had a Black teacher ever!” She was like, “what is going on here?” She ended up in my class. We could talk about various things and she felt like she could relate to me. That really awoke me - brought an awareness to me that diversity matters. I’ve always been the only Black person in the classroom or at a teacher’s meeting. That’s just who I am, that’s my life. I’ve experienced racism but it doesn’t get the better of me. What I’m happy to see is that now there are teachers of colour in the classroom.”

Morgan notes that there are probably only a handful of Black female conductors in Canada working at the university level and that there is work to do to get women of colour into these positions. She also shares how fortunate she has been to have strong, female mentors during her education such as Victoria Meredith who was her Masters supervisor at the University of Western Ontario and her Doctorate mentor, Hilary Apfelstadt who was at the University of Toronto. Morgan elaborates, “my race was never an issue. Those seeds of limitations were never placed on me. I always believed I could do it because everybody always told me I could.” Her influences of strong women extend beyond her academic mentors as she notes the importance of her colleagues at Luther College High School, her mother, sister, aunts and grandmother in her upbringing as well. It is evident that Morgan will also continue this role of support in the lives of her students and singers.

“We’re all here for each other. That’s why we’re on this earth. I’m here for you, you’re here for me. However we interact or don’t interact, whatever you do has affected what I do. We’re all on this earth for each other. How can we interact with others to make this a better place? Forget what you look like, or what you’re wearing, what language you speak,” she shares with fervour. While 2019 was a year of change, Morgan speaks with a wisdom that recognizes that embracing the discomfort of change is the only way to move forward. 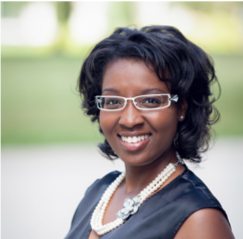 Dr. Melissa Morgan is a choral conductor, educator and performer. Currently, she directs the choral program at the University of Regina where she also teaches courses in choral conducting and vocal diction. She is frequently asked to appear as a clinician, adjudicator and guest conductor throughout Canada.
Dr. Morgan holds a Doctorate of Music Performance in Choral Conducting from the University of Toronto, a Master of Music Performance in Choral Conducting from the University of Western Ontario, a Bachelor of Arts and a Bachelor of Music Education from the University of Regina. She is also an Associate of the Toronto Royal Conservatory of Music (ARCT) in piano, voice, and flute. Throughout her education she has had the privilege of studying with exemplary teachers. She is grateful to have worked under the supervision of Dr. Hilary Apfelstadt, Dr. Victoria Meredith, Kathryn Laurin, and Diana Woolrich. In October 2017, Dr. Morgan was named as one of CBC Saskatchewan's Future 40 under 40 recipients.

A proud Filipino-Canadian, Dominic Gregorio was born and raised in Guelph, Ontario, completed a Bachelor of Arts degree in Music at the University of Guelph, a triple major Master of Music Degree (Voice, Choral Conducting, Music History) at the Temple University in Philadelphia, and a Doctor of Musical Arts Degree at the University of Southern California in Los Angeles, earning the prestigious medal, The Order of Arete in 2012. Dominic was Director of Choral Activities and an Associate Professor in the Department of Music at the University of Regina, and had a tremendous impact on campus and in the community. He was generous with his time and passionate about sharing his gift of music with the community.

If anyone would like to donate to the scholarship please contact: the University of Regina Development Office and ask for Luanne Drake, Luanne.Drake@uregina.ca; 306-337-2450