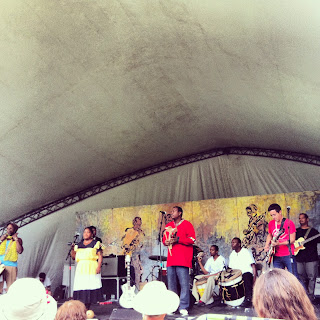 As the heavy humidity settles throughout the festival grounds at Birds Hill National Park, signalling the impending rain, Danny Michel enters the Media tent early for his interview. He sets down a black case on the table, shakes my hand with a smile and asks, "Is it alright if we do this now?" He has just come from the autograph session following his joint Winnipeg Folk Festival session with the Garifuna Collective.

"No problem," I reply, gathering my materials for the interview.

Michel is entering the third week of his joint Canada and US Tour with the Garifuna Collective from Belize, whom he collaborated with on his Juno-nominated album, Blackbirds are Dancing Over Me.


"What Colour Are You?" (Official CD Mix) by Danny Michel


Michel is often seen performing solo shows on festival circuits but, this time, he has brought an entire troupe of musicians with him. "I've decided to go from solo to ten people," he laughs while reflecting on this abrupt transition. Michel's current tour is filled with unique challenges, such as negotiating work visas and coordinating with the Department of Fisheries for customs clearance of percussion instruments like turtle shells. "Everything has been so stressful and so much work, but as soon as we get on stage... it's worth it," he states. 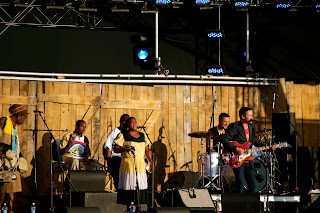 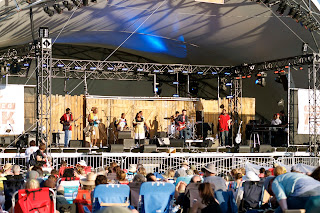 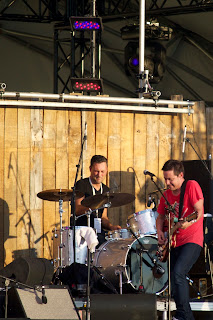 The dancing crowds and enrapt audience at Friday's sessions supported that fact. Both Michel and the Collective shared the stage, taking turns to perform each others songs. A trend which they will follow for the rest of their tour. As a result, all their performances generate a collaborative workshop energy.


Collaborative projects are challenging to execute because it requires a openness and trust from all participating musicians. There is an uncertainty in the fact that neither party is sure of the musical result. Yet, at the same time, that is the beauty of the process because there is an excitement at the prospect of musical genesis. Michel describes his first meeting with the Garifuna Collective in Belize for the album:

"I walked into the room of people I've never met being this little guy from Canada. "Hi, everyone. You should trust me and play on my record and play my songs," and [they were] looking at each other going, "mmm how is it gonna work?" Michel smiles, recalling memories of the situation.

"How did it work?" I inquire further.

"It just worked. I'd go in and show them a song idea, record the guitar part, I'd sing it, and then we'd have my guitar and vocal. Just like a good ol' singer songwriter song then we just started piling it on... It kinda just became itself," he replies.

Even when the record was finished, Michel wasn't sure of the result. "I was close to it. I was so in. So deep that I couldn't see it with any perspective anymore," he demonstrates for me while squinting to see the details on the side of his black case. However, Michel reveals that he never felt like it was a risky endeavour to record the Blackbirds album because he had a solid rationale for starting the project with the Garifuna Collective.

When considering how Michel's lyrics from What Colour Are You? "Why can't we all just communicate", I wonder if his current album and tour with the Garifuna Collective symbolizes how open communication between cultures can be successful.

Michel delves into his thoughts, reflecting on the cascading effects of his collaboration, his gaze unfocused upon the surface grains of the wooden table. He remerges, maintaining his humble initial intent, "If I can be a part of inspiring anybody to try more things like [musical collaboration], that's an honour to me. I looked at this project like, well, I'm just gonna try it and see what happens. If it doesn't work, if it fails, then it's still going to be a great learning experience. And the exact opposite has happened. It has snowballed. All I wanted to do was make a record. Now it's a record, then a tour, now it got released in the US, now it's on the Polaris prize list." Michel elaborates further, "I think that maybe happened because it was really genuine. It wasn't a plan. We didn't have a marketing plan. All we did was put our heart into something and try. And so maybe that's the secret to its success - that it was honest."

Michel's travels to Belize and Garifuna collaboration is a definitive moment for him as an Artist, not only learning from the perseverance, vibe, energy, and heart of the Garifuna Collective performing on stage but, lyrically as well, contemplating the future topics he wishes to address as a musician.

"There was some point, probably around the time where I got tired of Pop music and where I wanted to go to Belize... there's gotta be more to say. There's gotta be something important to say. There's gotta be a way of saying it without it sounding preachy...where I'm bonking people over the head with it. So I've tried really hard to kinda say that without sounding preachy... It was a turning point in my life. I don't even know if I know what it was, I just thought I can't do this and not say something more. So I'm just trying to be more thoughtful."

There is no grand plan for Michel. No gleaming whiteboard with dry erase etchings detailing travel and song plans for his future. He prefers it this way. Guided by musical intuition, he does what he feels is right for him at the time. Michel does reveal a general philosophy he follows:

"My goal is to keep following the goal of writing more thoughtful music and just trying to get much better at it... I have something to say. So in 50 years, if I'm gone... one of my songs could still be important and still have something to say to somebody," he says thoughtfully before laughing at himself, amused at how deep his contemplations led him.

Regardless of topics, songs, or collaborations Michel chooses to address in the future, they will always originate from his humble intent to challenge himself as a musician.

"This Is What Is" Danny Michel with The Garifuna Collective - feat. Paul Nabor by Danny Michel

Listen to the whole interview here: Interview with Danny Michel at Winnipeg Folk Festival by misssable