The Arrival of the Virtual Choir 2.0 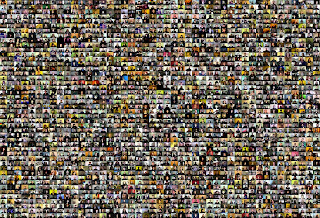 It arrived on Thursday, April 7, 2011: The Virtual Choir 2.0
After purchasing a USB microphone, spending hours learning, rehearsing, and recording myself to get a solid take of myself singing all four treble voice parts in "Sleep," it was time to watch the premiere Virtual Choir video. Strangely enough, when I watched it, I just felt a feeling of disconnect. Maybe in the few months it took Whitacre's team to compile the audio and video together my excitement had died down? It was still cool to see, don't get me wrong, but I was not moved to tears at the musical climax of the piece as many other viewers were.
To be honest, I was mostly curious to see if I would be able to catch a glimpse of myself singing in the video. I was also nervous since singing is not always a pretty thing to photograph and, on more than one occasion, I have had pictures snapped of my contorted face while singing an unattractive vowel. However, this was not the case and I am happy to report that I spotted myself at least three times in the video. They were all from the different videos from the four that I submitted (if you look closely on the "Canada" orb at 5:01 I'm on the lower central part of the globe). I believe they had a randomization software that made sure all of the 2052 video entries were shown at least once in the video and some of the close-ups are of Whitacre's personal favorites. On Whitacre's site you can already order a wide variety of Virtual Choir merchandise, such as t-shirts that state: "Choir Geeks of the World Unite." While this particular message resonates with me, I am trying to move past the stage where I wear t-shirts with personal proclamations.

Ultimately, it was a very cool project to be a part of and I'm interested to see the buzz and future projects that will occur as a result of it.
If you haven't seen it check it out here:
Posted by misssable at 11:55 PM

I too, was not "moved" like some other concerts I have attended. I think it is amazing that people from all over the world are able top participate in a project like this but I also think there is a HUGE disconnect when you are not able to sit with the chorister next you, match vowels, tune and simply feel the music. Well done to all the virtual choristers for making a beautiful project but wouldn't it be amazing to have 2052 people all in one place doing this? Something to chew on.

Gillian-I totally agree with the musical disconnect when you're not sitting next to fellow choristers. Having all people in one place would be cool though, largest mass choir ever!

I am happy to find this very useful for me, as it contains lot of information. I always prefer to read the quality content.