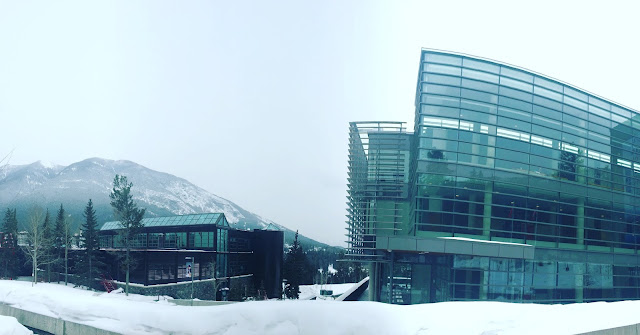 It has been a week since the first Choral Art residency at the Banff Centre has finished up. The entire residency ran just over two weeks in length. There were five composers and five conductors accepted into the program to work with the Choral Art Faculty composed of Michael Zaugg, Lone Larsen, and Ugis Praulins. Each week hosted a different ensemble of eight singers. This was the lab choir for the conductors and composer.

I'm just starting to emerge from the haze of living on the Sleeping Buffalo (a.k.a Tunnel Mountain) for 10 days. It felt like a strange time warp where I was at adult music camp for an extended period of time. My heart was full but this was paired with significant exhaustion. I remember pondering how I was going to fit another note and direction in my brain as the hours passed by during my days there. I was aware the experience would be a challenge going in; however, I had no idea how intense it was going to be until I was immersed in it. Ensemble Two had the challenge of receiving new scores from the composers and getting them concert ready with the conducting participants in three days.  Ensemble One had their own set of challenges to overcome. They had a set of scores which they had previously prepared and there a focus on the conductors to practice their gestural technique using these set of scores. The Ensemble One singers also sang through the composer's sketches, gave feedback, and read through some of the provided texts that would eventually form the works for Ensemble Two to perform. In between the residency for Ensemble One and Two all of Pro Coro singers for our Canadian Connections production headed out to Banff to rehearse and perform. The weekends also had opportunity for the participating choirs, Dnipro, Joyful Noise, and the Edmonton Youth Choir to work with the Choral Art Faculty and some Pro Coro singers.

Ensemble One was joined by the rest of Pro Coro on the weekend and the focus quickly shifted to rehearsing and presenting Ugis Praulins' Nightingale. Those first rehearsals in Banff rehearsing the Nightingale in front of Praulins himself was a bucket list moment for me. Six years ago, I remember being wide awake after rehearsals. I was buzzing from the energy of the piece. It led me to compose this Painting the Nightingale blog entry, which connected me with Ugis. That first rehearsal at Banff Centre was a moment where I felt: "Life cannot get better than this," as I sang with Ugis and in my peripheral vision. He would give a few brief statements of his vision for a certain movement and then sit back and gently nod when we would try another run of the line again. Pro Coro performed the full Nightingale the next day in concert at Banff Centre before returning to Edmonton on Sunday afternoon to sing it again at All Saints Cathedral. There was something magical about that Banff Centre performance though. In addition to the Nightingale, Pro Coro also sang The Way Children Sleep, Cy Giacomin's Negen and David Désilets' en vuelo. Flûte Alors! joined Pro Coro for these weekend concerts and demonstrated the wide sound palette produced by recorders in the different pieces.

After Ensemble Two's arrival out in Banff, we had a fantastic choral and body warm-up with Lone. We played games to explore concepts of trust, sending energy to our partners through our voices, making sure everybody had the opportunity to do their best, exploring some basics of choral improv and how to generate a song together based on a concept, setting, or few lines of provided text. The session was mindfulness at its best since I was present those around me. After this two hour session, my mind felt buoyant, devoid of the cycling of internal self-talk. However, this feeling of buoyancy was quickly replaced with stress for me at the Monday evening rehearsal. During our dinner break, we received scores from the composers who had been hard at work to meet their Monday afternoon deadline. That Monday evening rehearsal was the first opportunity for us to sight-read our way through the scores in front of the composers who wrote them and for the conductors who would  conduct them. Michael sat down at the piano and gave a disclaimer to the conductors and composers in the room that all comments had to be reserved for later. He made it clear that this rehearsal was for him to work with the singers and read through the score. The studio practice room fell silent. I realized soon after that there were only three days to prepare these scores for their concert debut on Thursday night.

Sight-reading in public and feeling unprepared is my nightmare as a performer. The reason that I have been a successful choral singer to date is that I invest time in the preparation process. In this way, I can be receptive to the conductor's comments and be able to implement them without worrying if I am singing the right notes or not. Although the conductors and composers understood we were all reading the scores, I still felt terrible at having to demonstrate my struggle at sight-singing contemporary works. I was frantically hitting my tuning fork on my knee in order to locate my starting pitches and seeing if I was still in tune at certain checkpoints when there was only one singer on each line. My brain was so overwhelmed that I had trouble reading vertically to locate parts that paired with my own. I changed my quality of sound while holding notes as my brain processed the vocal descriptors above the written notes like "glottal fry," and I would be striving to create overtones through a series of outlined vowels a bar or two after the overtones should have already commenced. It was a test in staying objective and keeping a forward momentum. I kept a log of my errors to revisit later during my own practice sessions. There was no stopping once we started reading. I later realized that this was one of the only times we had the chance to sing through some of the pieces from start to finish until the concert run. Previously, one of my Med School friends gave me an expression that summates how I find it in intense scenarios like this: it's like drinking from a firehose. There is such a high quantity of information to absorb in such a short amount of time that one feels pummeled by this constant bombardment of information.

Every rehearsal following this initial one would feel better in some ways and then worst in others. It's part of the frustrating process when multi-tasking to learn new skills. For every 5 hours I spent in rehearsal, I spent 3-4 hours of my own time working through the music by myself or in small groups with other singers. There was a point somewhere between Monday night and Thursday evening where the balance began to shift: I was working hard not just to redeem myself from a terrible sight-reading session but it was out of my respect for the composers in the program. I really wanted to sing my best for their pieces.

The rehearsals weren't stressful all the time though. There were light moments like when Michael commented on how "Pro Coro likes!" after singing the lush chords in Laura Hawley's, Absence. I accidentally recomposed my Alto solo line in Jonathan Russ's, Motion and Use, a work set to texts from Tao Te Ching. To be fair, Michael only deemed me to be the soloist a few seconds beforehand by making eye contact with me. The group chuckled when my fellow Alto and I mustered up a know-it-all, nasal tone for the delivery of the line, "The truth is relative." I was surprised at myself for how easy it was for me to channel this obnoxious persona. This previous text was from in Jason Noble's brilliant Furiousier and Spuriousier. The Unforseen Consequences of the Democraticization of Knowledge, a musical fairy tale of Lewis Carroll and René Decartes. Stuart Beatch presented a recent commission he had been working on, I Am Like Many, for the Senate House Library's exhibition of Queer Between the Covers. Netta Shaha's work, It Is All a Chaos of Nothing, was an evocative contrast to the other works on the program.

It has been a long time since I have felt this exhausted from a musical experience. I fit a month's work into three days. I survived living rehearsal to rehearsal, meal to meal, with some periods of sleep interspersed throughout those segments. Survival was possible due to the positive reinforcement from the conductors and composers, as we chatted in line at Vistas dining room buffet, locking myself away in a practice room to play through chords while learning my part in context, and sectionals with fellow choristers in the practice hut. These sectionals were equal parts wild and hilarious.

I had all these ambitious plans to write, conduct interviews, learn how to use the climbing wall at the Rec facility but my energy went into taking care of myself and learning music. My days were a general cycle of eating, drinking a hot beverage, singing practice on my own, singing in rehearsal with others, and then repeating that cycle about three times.

My take-aways from the experience:
Do you think you're up to taking part next time? Conductors and Composers reading this post, keep your eyes open for applications to Choral Art 2019, when they come out later this year.

Here are some more photos from the residency: