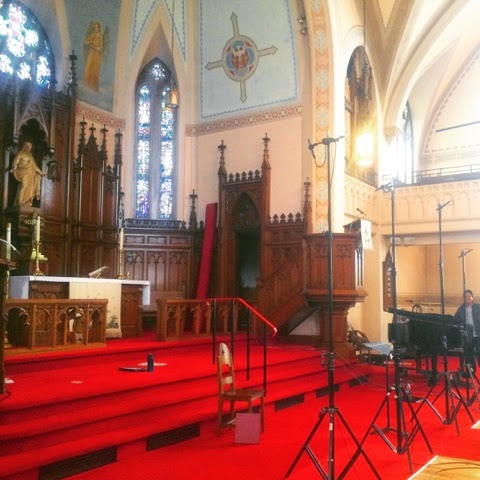 There are many times in my life when I am reminded of how lucky I am to pursue multiple passions. My daily Edmonton life is filled with speech pathology clients, playing with my nieces and nephews, working on my computer while my mom crochets and streams Asian tv shows on her iPad, watching my dad work in the garden as I hand-grind beans for an americano, late-night chai lattes with friends, biking across the high-level bridge, and live theatre in cozy theatres; however, whenever I get the chance to uproot from my local community and venture off to to pursue another passion, choral singing, it leaves me wondering who exactly I am sometimes where I have the luxury to play these multiple roles. I excise myself and transplant myself into another choral community for a few days sharing music-making with others. In this past Canadian Chamber Choir trip, the focus was on recording a C.D. entitled, A Canadian Mass: Sacred Reflections of Canada. It is an array of sacred and reflective texts by Canadian composers. 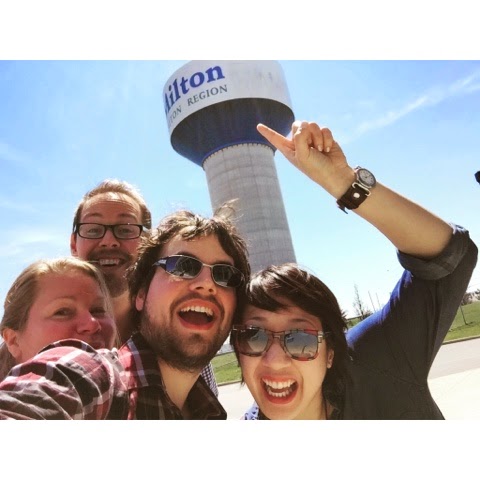 We arrived in Elmira, Ontario on Thursday evening for rehearsals and starting Friday started a three day process to begin recording 18 tracks for the C.D. As frustrating and fatiguing as it was to have to re-do takes when there were noisy infringements on the recordings atmosphere from busses hissing at their stop to motorcycle mufflers rattling on the road in the front of the church, there was a sense of silent camaraderie ride amongst all the singers and splendid moments of music making. 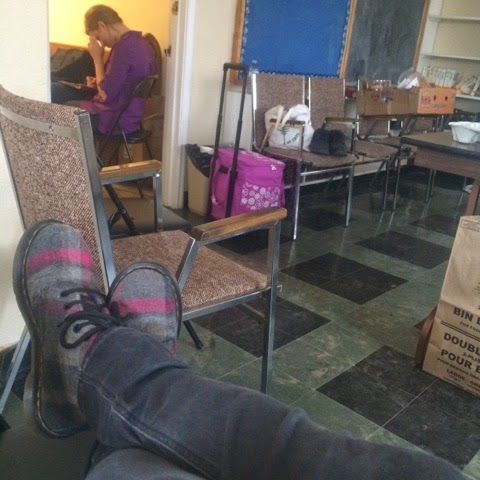 Tension. I was reminded of how tense I was holding myself during the recording. It stemmed from hearing the increasing number of takes announced on the speaker from CD producer, Jeff Reilly, in the recording room: "Ave Maria by Fogarty Take 34". The starting pitches were given by the Dr. Julia Davids on the digital keyboard. She stepped over the serpentine knotted black piles of recording chords, before resuming her position at the music stand to cue the choir in on a piano entry with a soft onset for the initial vowel in "ave."  So much tension. I had to remind myself to breathe, sing with confidence, and trust in my fellow singers. A recording session is like a simulated pressure cooker in how everybody responds to stress. Sometimes it is removing visual distractions, other times it is accepting things beyond ones control like a tummy gurgle or an elbow pop. Often my tendency is to leave something hard then come back later; however, that was not really an option this weekend. We had a limited amount of time to record a lot of music but I could also sense the anxiety rise exponentially take after take of an imperfect phrase delivery. There were also other moments where I could relax and bask in the searing pure tuning of some final chords like the final word "free" in Barrie Cabena's "Be a still and know that I am God" or the warm, hushed tones of Don MacDonald's "tabula rasa."

There was a nice rhythm to the recording days. It was refreshing to be able to wake up and not have to pack and commute to another town. Instead , I had the luxury of leaving all my things in one place and just preparing what I would need for the recording. Upon early arrival at the church, I also had time to explore Kitchener downtown and locate some local coffee establishments to get me through the rest of the afternoon and evening. 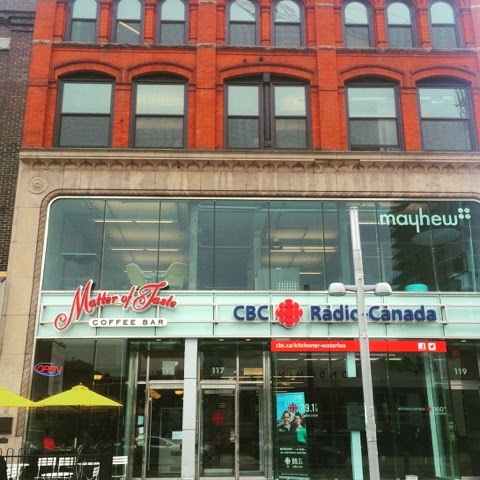 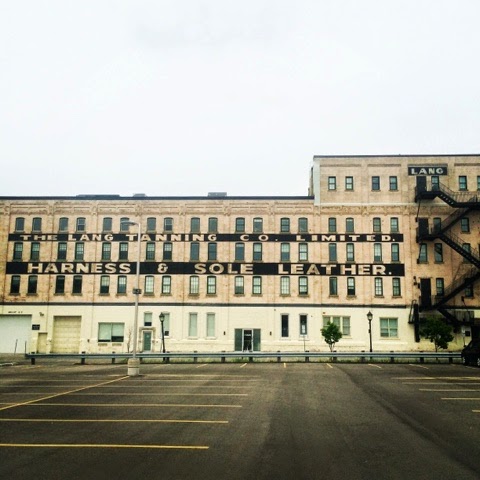 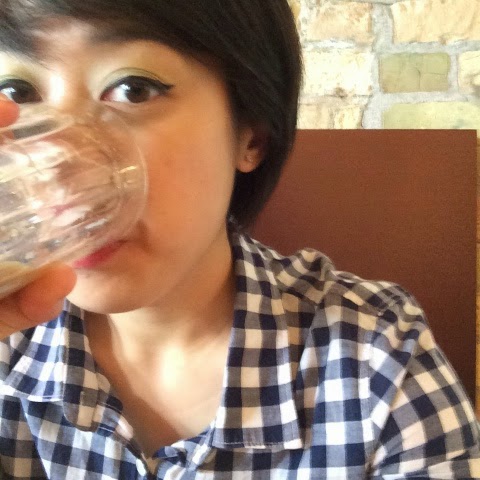 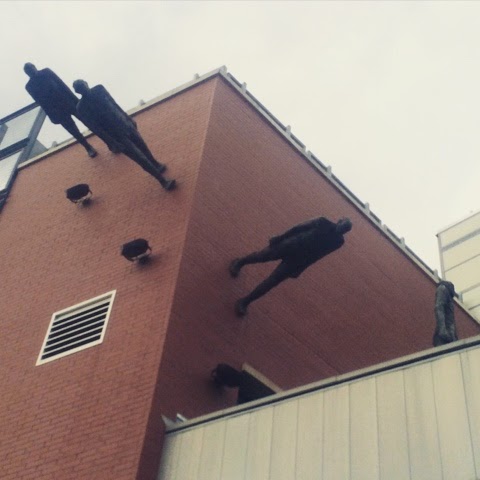 The recording process would usually start with a cold run-through. From there we would get basic notes from Julia and Jeff and then we do another run-through again. From there we might get more detailed notes and do another run-through, this time, starting and stopping the take. Depending on results, we might have to work backwards or just do sections of the piece. If we still needed more precision then we would do a surgical strike and record just a few bars of what we needed. After all of the inner detail work, we would usually run the piece another 1-2 times to see if we could capture any additional magic after all that work. Each piece took about 45 minutes to record on average. In between takes, I would wiping my brow, sticky from the humidity, or sprawling across the stairs on the floor of the church to see if the sharp angle could help dislodge the tension knot in my right shoulder blade from holding my music folder. 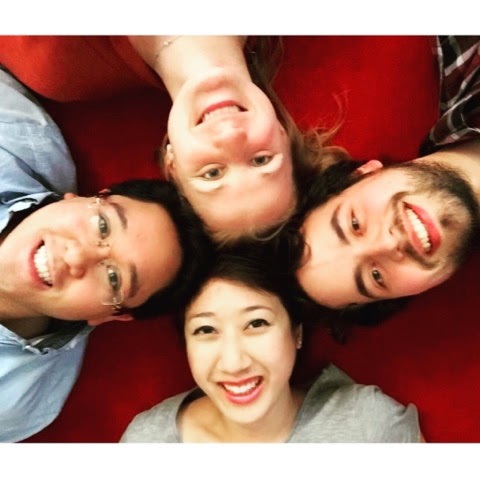 After 18 tracks and three recording days we finished our final take of that day, take 50 with Stephanie Martin's "O Sacrum Convivium." A rousing round of cheers, group hugs, and pats on the back resulted after Jeff announced completion after the final take. There was a unison feeling of relief and satisfaction.
You can pre-order the CD at the website which will be released sometime in the Fall.


There are numerous people to thank in order to execute this recording: Conductor, Dr. Julia Davids, Producer Jeff Reilly, Recording technician Rod Sneddon, the 20 CCC singers flying or driving to Ontario, the community billets hosting the singers, all the CCC CD donors, and CCC General Manager Corey Ticknor. I do want to take this time to give a special thanks to Jeff Enns. In addition to being the CCC Composer in Residence as well as CCC singer, he had to juggle so many things at the ground level to make this recording happen. He drove me to the Hamilton airport (I was the only chorister leaving from this location), connected with host families for choristers, tended to a sick pre-teen, managed church bookings for the recording, organized Sunday service, drove choristers everywhere, coordinated vehicles for rides, grocery shopped late on Friday night for sandwich lunch components the next day, and cooked extra soups and casseroles this past week to make sure there was enough food. I'm sure there were even more duties he completed with stealth that I don't even know about. It was a pleasure and a highlight to sing at his church, St. James Lutheran, in Elmira on Sunday and give back in a small way after the additional stressors he took on while maintaining his comedic charm. Covert heroes are the best. 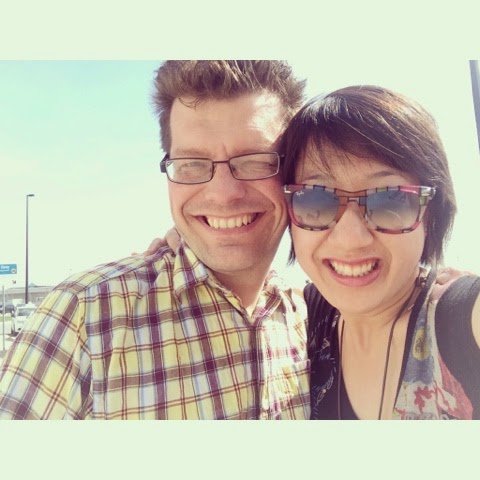 For more social media posts from the weekend:

Posted by misssable at 3:00 PM