Epilogue: Life After the Circus

As the dust settles on the stage of the Jubilee Auditorium, the stage stripped of all of its rough striped canvas, and the gritty floors detached from the foundation that formed the temporary on-stage Dustbowl Circus over the past week, it just makes me wonder:

Was any of it real?

Or was the world I was a part of for the last few weeks another reflection of the drunken haze of Hoffmann's tale which separated the world between reality and spectacle?

The assimilation process was so gradual from a chorister into a opera chorus girl. I remember feeling like I was in sensory overload the first time I was wearing my costume while the chorus was warming up in the dance rehearsal room. I couldn't help but turn to give wary glances at the stranger staring back at me in the room surrounded by mirrors. A fellow chorister noticed, smiled, and teased me by stating that I was looking at myself a lot during the warm-up. His assessment was accurate. However, it was due to an uncomfortable visual disconnect with my reflection. Even though I looked the part, I didn't feel like the character. The next couple of tech week rehearsals on the actual Jubilee stage allowed me to rediscover the character confidence I had developed during staging rehearsals. What I didn't notice was the fact that I had gradually become an opera freak myself, until I caught a glimpse of my reflection from a fellow choristers' lens on closing night. Gazing back at myself in my vanity, I could barely recognize the amplified stage version of myself that had developed over the past few weeks. The photo really embodies my transformation from the choir girl to the glamour of my opera chorus persona. 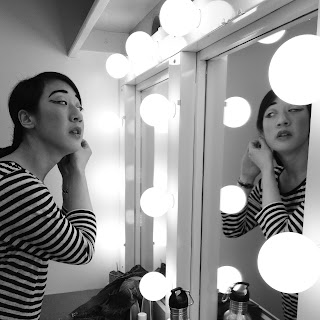 Being a part of the Opera Chorus allowed me the freedom to explore different parts of my performer persona. I felt comfortable because everything I did was still true to my own personal character; however, I had to heighten certain aspects to come across on stage. I embraced my role as a flirtatious gypsy wife. My approach was to think about what I would have wanted my character to do on stage or what it would look like if I was watching in the audience. I have minimal experience with acting. I have had much more experience as a member of an audience. It made sense for me to use what I know. Using these guiding principles, I let the stage become a social experiment in human interaction. Strangely enough, even though the stage is so exposed, because one is on physical display, there was something so supportive and receptive about the energy of the ensemble that made me brave enough to experiment. It is rare to experience moments like this in daily life, but on stage, the interconnected energy you generate with those around you makes this imaginary world come to life.

The real magic is not just what occurs on stage but how this onstage energy transitions off-stage. There is a gradual level of familiarity that develops between all of the chorus, supers, and principal's in the backstage as we pass one another in the halls, stand around the plentiful snack tables in the Green Room, or reminisce at the post-performance parties. The experience is so intense that people who were strangers to me mere days ago were quickly becoming my second family. This is so different than a choral ensemble since one can slow-burn for an entire choral season from Fall to Spring. As well, true choir bonding opportunities rarely occur unless there's some kind of retreat or tour. The Opera time-frame is much more compressed with rehearsals and performances all within a few weeks. There is a sense of urgency in the off-stage energy of Opera; an unspoken understanding that the experience is fleeting, and if you don't seize the moment... it will be gone.

Just as quickly as the circus arrived onto the Jubilee stage, it disappeared, taking with it the opera freaks and chorus carnies that populated this world. All I have now are my memories of my circus experience, a string of favorited tweets, and a catalogue of photos that serve as a reminder that I was a member of this temporary spectacle. I was surprised that I didn't plummet into a post-Opera depression with the knowledge that there will never be another Tales of Hoffmann in this exact setting with these exact performers. Life after the circus isn't so bad because I recognize that the process was about personal self-reflection and embracing my inner performance freak. It's an innate part of my true character. As a result, my inner choir girl freak will be waiting for the next circus to roll into town.


Other Choir Girl Blog  exposure generated from Tales of Hoffmann:
Interview for In a Word with the Charlebois Post
A Choir Girl Blog Mention on Brittney's 5k365 Blog
Posted by misssable at 12:00 AM