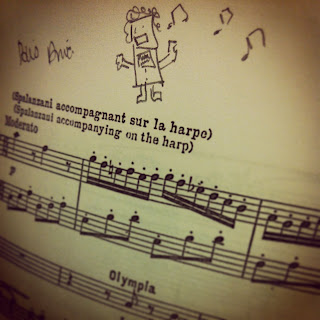 This last week of Opera activity has encompassed the staging process for the Prologue and Act I. Suddenly, the rehearsal hall was filled with many new faces containing the Principals and supernumeraries (a.k.a Supers which are extras on stage that don't sing but create the environmental population of the stage). Supers also get the most freaktastic costumes.

The start of the staging process began with a verbal walk-through of the Opera with director, Joel Ivany, explaining his vision to set the opera in a Dustbowl circus. Meanwhile, set designer, Camellia Koo manipulated a miniature diorama of the stage and changed the props to match each act so we could watch the physical transformation of the stage. Many interesting topics arose from the description, such as how the Circus symbolized this group of traveling Otherness that would arrive in a town. There would be a parade of clowns, dancers, contortionists, elephants and circus freaks etc., and for a limited time, they would be the entertainment for the town. Not unlike what the Opera offers in terms of audience entertainment. Ivany emphasized that the world of Opera, in its own right, is like a freak show: vocal athletes singing soaring arias in a world constructed to be a spectacle.

While the staging process does feel like we're herding people sometimes, there is a sense of order to the madness. We are split up into large sections, then smaller orientations, and then we're handed props we are responsible for. Meanwhile, there are stage crew members madly jotting down our names from our name-tags in addition to the prop(s) we're bringing onto stage. As well, before we put anything back, they write our name on red tape, and stick it on the bottom of the prop, so there is an ongoing inventory of personalized items. Any larger prop shift on stage will cause us to change the tape markers on the floor, which will later be transposed onto the Jubilee Stage. Furthermore, whenever certain groups of people are split to exit or enter, the stage crew will be writing down a list of names to chart these movements as well. No detail is missed.

However, most of the individual movements, such as the Prologue, where the circus crew are drinking behind-the-scenes, is given to us to individually dictate. It is a great opportunity to develop a back story and to think about how your character would act given the role, the costume provided to you, and the surrounding stage environment. I have had some experience with staging before but I've never done it on a professional scale before. It is nice to be allowed the freedom of artist expression and the process is extremely organic as Ivany experiments with and suggests different movement details depending on what he sees with each run-through.

I'm constantly experimenting to try and find what is comfortable for me while creating my circus persona. In my first run-through, I wasn't sure what to do with my hands, my props, where I was allowed to move, if I was allowed to touch people... and then I just stopped panicking and started paying attention to what was happening around me. So far it's been going pretty smoothly. For a large part of the opera, I play a "Circus Wife" and my costume gives off a nomadic gypsy vibe. Even though I'm married to one of the roustabouts, I feel like my character would have accepted the open relationship possibilities within a traveling company of artists. I try to keep this in mind as I interact with others on stage.

There are more rehearsals this week so stay tuned for more updates. The Edmonton Opera has been doing a great job on social media with posting pictures and updates about the performance. You can also read more about the inspiration behind Ivany's vision for Les Contes d'Hoffmann.

For more information on performance times and tickets: