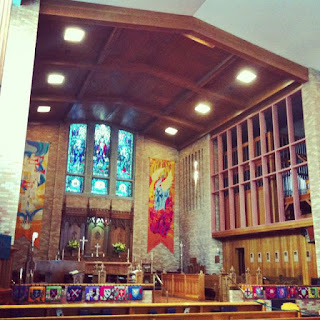 Mendelssohn, Bruckner, Brahms, Schütz and Schein were just some of German-choral heavyweights on the program at our most recent Pro Coro concert. It is a must that professional choirs are able to perform iconic German choral standards such as Mendelssohn's "Richte mich, Gott" and Bruckner's "Os Justi." Or else, how could we compare one another?

The rehearsal experience for this concert felt very different than our first concert. Rehearsals for our first concert were centered around conquering the ambitious program laid out for us and, at times, we were caught up in the frenetic energy of presenting novel works. However, these most recent set of rehearsals were more like workshop sessions. The music served as a template for developing an important skill: a sense of ensemble. We actually had the luxury of listening in rehearsal. The focus was not on learning notes, but discussing vowel alignment, chord progressions, and textual meaning.

The best term I can use to describe the rehearsal process is aural deconstruction. We would arrive as this sonorous mass; however, throughout the rehearsal, we were separated, first by section, then by individual voices, until Zaugg found what he was looking for... whether that was a particular vocal colour or a preferred vowel formation. Rehearsals were composed of constant experimentation with degrees of lip rounding, length of initial consonant aspiration, dynamic levels, and how these details applied to the music.

In many rehearsals, we stood in different structural orientations (e.g. semi-circle vs. full circle) or in mixed voice formations. The Schein motets were performed in a cappella quintets, with one voice on each part, thus, requiring each singer to perform with soloistic sensibility. During the Mendelssohn Psalms 2 and 22, we were in a split double choir formation with soloists interspersed throughout the choir. At another rehearsal, we sat alternating between male and female voices parts (e.g. STSTSTABABAB). One of my favorite arrangements was where we stood in mini circle ensembles and each ensemble would sing only one measure. This forced us to pass along the musical momentum in the individual bars. Thus, we had to make sure to align consonants as well as dynamics. This was especially tricky at German word final consonant clusters that elided into the initial consonant of the following word. Another fun text activity was where we sang the English translation instead of the German. I could immediately hear the passionate fervor in our voices as we sang in English. The challenge was to superimpose this same energy onto the German text. All these individual rehearsal exercises were aimed, not just at developing individual voices, but the voice of the group. 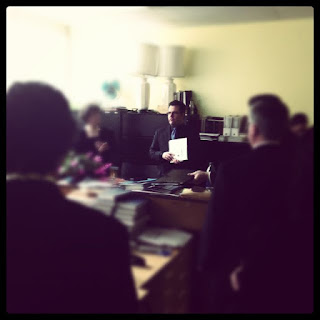 The aural deconstruction process is an important one. It is a process that cannot be skipped, especially since Pro Coro is just beginning to shape its choral identity under Zaugg's artistic direction. Hearing the searing brilliance of the opening chord in Mendelssohn's Psalm 100 "Jauchzet dem Herren" at Sunday's concert indicated, to me, that Pro Coro is on the right track.