The Internal Frenzy of Rehearsal 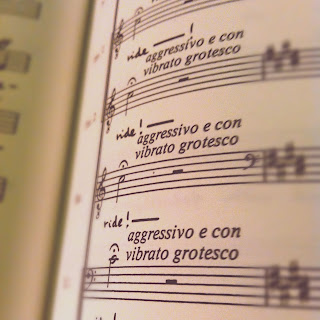 It was a very busy weekend. Pro Coro began rehearsals for the opening concert of the season. The concert is aptly titled, "Once Upon a Time," and all the repertoire choices revolve around that Fairy Tale theme. I can honestly say I've never sung songs about a unicorn capture or Hans Christen Anderson stories before. It is awesome. So many times throughout the weekend, I thought: "I can't believe I get to sing music like this." There is no other place I would rather be and no other music I would rather be singing. The hours of rehearsal passed quickly for me. After an intense five hours of singing on Saturday, I left energized for my four hour Ordo rehearsal in the evening.

Of course, as with any new group, there were some growing pains. Zaugg would introduce some gestural strategies, such as modeling a subtle tandem breath before phrase initiation or the delayed delivery of final German 'h-t' consonants, and we'd be slightly off as a group each time. He brushed off our failed attempts in a neutral manner, rationalizing that there would be time for us to learn those skills eventually.

The weekend wasn't without its own mental challenges since I was actually petrified to begin rehearsing the piece by Ugis Praulins' "The Nightingale." This was unfortunate because I love the piece, it reminds of epic modern-day feast music. However, since I have been looping the recording by The Danish National Vocal Ensemble since May, I developed a very different sense of the work. I was listening to the piece as one unit. Not so much the individual lines but how components worked as a whole. Thus, when I finally received the music in August, I started to realize the intricacy of the musical construction divided amongst those 20 parts. In some cases, what I thought was one melodic line was actually a summation of multiple musical fragments sequentially executed by different parts. It requires substantial rhythmic precision. It also didn't help that I couldn't flip through the pages of the music as fast as I was hearing it on the recording. If I can't even flip pages fast enough, how will I be able to read the notes on them? This created a sense of unnecessary internal chorister frenzy.

Upon rehearsing the Nightingale movements, however, I realized that my accuracy improved at a slower tempo. Shocking, I know. I had a flashback to my childhood piano lessons. My least favourite part of lessons: playing pieces at an excruciatingly slow tempo when learning a new song. I would sit at the keyboard and force my fingers to play with a heavy deliberateness. Even though I retaliated with my own display of subtle indignation, I couldn't help but note improved performance when I gave my brain time to process the music. Alas, the same learning principles still apply today. Imagine that! I lost my sense of musical perspective by listening to the full-speed recordings. It is always good just to take a step back and calm down. Nurturing a sense of anxiety didn't prove to be the most effective music-learning strategy.

Therefore, after a weekend of rehearsals, I have a solid ten days to indulge and allow myself the freedom to read at a slower tempo... something I should have done in the first place. Sometimes the most obvious things aren't so apparent when you're caught up in the frenzy of a new season.

Until next time readers, take care!
Posted by misssable at 1:00 AM