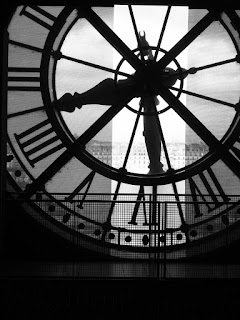 Have you been waiting with bated breath regarding news of Pro Coro's next artistic director? Well, you'll just wait a little longer since the selection committee will be meeting later this week. Next week, I'll post more on my personal thoughts about each of the candidates. Out of respect for the selection committee (and to keep my inherent bias under control), I'll keep my personal choice confidential for now. I know I probably haven't been doing the best job with my rather detailed blog posts, but oh well, it's a grey line with how much information I should and shouldn't share. While I want to show respect to the selection committee, I also believe that I should be able to write whatever I want on this blog since my personal thoughts are mine to share.

I will remark on the concert itself: It went really well! Although the performance did have its glitches, some occasionally questionable notes, minor tuning issues, and some textual mix-ups, overall, I felt that the entire concert was solid and emotionally moving. I could hear people singing out with their full voice around me--- we were taking risks and it was paying off.  If we're not taking risks then, clearly, we're not challenging ourselves as musicians. Zaugg was providing positive reinforcement throughout the entire performance and was giving off this tuned-into-the-music but zoned-out-of-reality kind of vibe. That is always a good sign. I felt that the choir was really connected to Zaugg and that we were working collaboratively with him to musically emote what he was showing us. He forewarned us in rehearsals that the things we were practicing would not be the same on the day of the performance. Since nothing was over-rehearsed, it allowed us the flexibility to provide an organic performance. We just worked the music to a secure level and Zaugg took us the rest of the way during the concert. As a result, there were stunning and musically self-indulgent moments in Elgar's Lux Aeterna and Talbot's "Santiago." 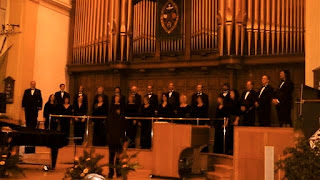 One thing that was really refreshing was that, during the performance, Zaugg would look at individual singers and cue them to sing out more. This is exactly what it was like during the rehearsal process and it was nice to continue to get that individualized cue during the concert itself. It's hard to know what the choir sounds like as a whole from a choristers' acoustic perspective so it's appreciated when we can get such specific online feedback while we are singing. With other conductors, it's more generalized gestural desires like adding a crescendo here or there, but Zaugg focuses in on exactly who and what he wants.

When we processed off of the stage during the final movement of Talbot's "Santiago" (mimicking the wandering path of the people on their pilgrimage), Zaugg closed his binder and gave a nod to us in thanks before he stepped off to the side to let us process off the stage. I wished we could have given a nod back in thanks but we had to keep singing. I was one of the last ladies to exit and in order to achieve the far-away sound we exited from the top of the stage and walked along the upper hallway into the church kitchen, while continuing to sing, and closed the door behind us, as if we were disappearing behind the hills of Santiago. It was technically crude but acoustically effective.

In summary, it was a fantastic concert! We were greeted with a standing ovation when we returned to the stage after our choral pilgrimage. Thinking back to the previous Friday when we met Zaugg for the first time, I felt like we had come a long way with the music and as musicians as well. There was a level of trust established in those 10 days. As Zaugg said himself before the concert, he began with a marriage proposal in the first rehearsal, and by the concert, we were having a night out on the town! Clearly, he knows how to show a choir a good time because we definitely stuck around :)

So until next time, take care readers and hopefully there will be more news regarding the choice for Pro Coro's next artistic conductor! Here is a video clip from "Auringon Noustessa" from the concert.

Posted by misssable at 6:31 PM